TT: What is Astrology?

Why is astrology not considered as a science in Turkey?

The 12th Verse of the Holy Quran Surah Nahl

"He has put the night and the day, the sun and the moon at your service. All the stars have been given to your service by His command. Surely there are signs in these for a nation that uses their minds."

Astrology is the study of the symbolic significance of celestial bodies of events occurring on earth.

The ancient principle of "As above, so below" forms the basis of astrology.

Thousands of years ago, people began to observe the movements of the stars in the sky and found parallels to the events on Earth.

When looking at astrology from a holistic approach, it is believed that the celestial bodies have little energies that act directly on us (I can't believe it when I think of the formation of tides under the influence of the moon).

Moreover, the positions of the stars are considered to indicate what quality of time they currently dominate.

Just as a clock shows us time even though it cannot be the cause of time, I see that celestial bodies convey to us which energies (for example, aggression, harmony, change, concentration, etc.) are active at what time.

The Universe shows us this, but (unfortunately) it is not generally understood. Because it uses a symbolic language and must first be analyzed, interpreted and finally adapted to daily needs.

To date, the natural influence of astrology has not been scientifically explained, but has become understandable only through personal analysis and personal experience. 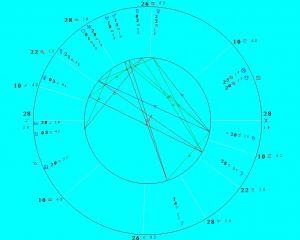 What is Astrological Birth Chart (Horoscope)?

The word "HOROSCOPE" is derived from Greek and means "I watch what is rising." The naming (present-day Latin: Horoscopium) Horoscope arose, which was of particular importance to the Greeks the drawing of the Ascendant (i.e. the star chart, which is the cluster of stars on the horizon at the time of a person's birth). Since then the moment of birth is the most important for the preparation of the Horoscope.